Dark Lord Day is the one day a year where the dark lord himself comes to Earth and sells his brew at the brewery of the brothers Floyds (3 Floyds Brewery). It is the only day of the year where you can get Dark Lord Russian Imperial Stout. This beer is suppose to be one of the best beers in the world, and since it limited to those who attend Dark Lord Day, it is also one of the rarest. 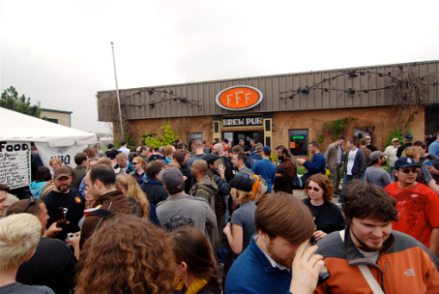 Two months ago I put out a call for brave souls to journey with me to 3 Floyds Brewery and obtain the rare Dark Lord Beer. Many people stood up to the call, but none where able to get past the first obstacle, acquiring a ticket. The tickets for this years event reportedly sold out within a minute. I will continue to try in the years to come, and one day I will be triumphant.

In the beginning there were monks.* These monks brewed beer for the greater glory of God. Then people brought their love of beer to America. They wanted to brew beer, so they did. But they turned away from their holy calling and started dedicating their brews to the dark lord. The culmination of their efforts is Dark Lord Russian Imperial Stout. An unholy brew made by those dedicated to him. It is available on only on Dark Lord Day, and you must go to the headquarters of the group itself to get it: Three Floyd’s Brewery.

I am trying to find brave souls to join me on a quest to Munster, Indiana on April the 28th to search out and acquire the elusive Dark Lord Beer. What is reported to be one of the greatest beers in the world. More information about tickets to the event should be forthcoming in the upcoming weeks.

*Actually the Church is a relative late comer to the world of brewing. Before that it was generally the woman of the household or Alewive’s job to brew the beer. Selling extra beer was also a good way for a widower to make money at a time when there were few prospects for unmarried women