I was sitting at L Woods Tap and Pine Lounge drinking a 5 Rabbits Beer Blonde Ale by 5 Rabbits Cerveseria, and I had the greatest idea in the world. An idea that will change the world, that will bring back something that people have been missing for hundreds of years. The breakfast beer.

If you ever go out for breakfast, your drink options generally are coffee or juice. Once in a awhile, especially at brunch, you will get to choose a mimosa or a Bloody Mary. I’m not sure about your, but those two drinks don’t really go with much. A mimosa might go with something nice and citrusy, but not very much more. A Bloody Mary will get you through your steak and eggs, but I’m not too big of a fan of steak and eggs. No, the only drink that is versatile enough to play with the vast menagerie that is breakfast, is beer.

You want something light, maybe a few slices of melon, maybe even a fish, how about a nice wheat beer, or blonde ale.

You want a Mexican Skillet, then how about an American IPA. Still want your steak and eggs, we got an american brown.

Oh, you want a stuffed waffle, with whipped cream and strawberries on top (and maple syrup). We got lots of options. I give you the english stout or maybe a traditional tart Lambic, or Flanders Oud Bruin – brewed with or without fruit.

The problem is that the number of establishments that will cater to this match made in heaven are few and far between. That leaves us with one option. To start our own Breakfast Brewpub.

Yesterday I went to a Whiskey 101 class from the company I Wish Lessons. I know this Blog is about beer, but what is whiskey but distilled unhopped beer aged in barrels. No wonder it is my favorite hard liquor. There has to be a reason that Michael Jackson wrote and talked (and drank) about both Beer and Whiskey.

I wish lessons has a number of food and drink classes, where they bring in an expert coach in the field. My fiancé actually bought the class from Groupon over a year ago, with the intention of taking the craft beer class. I put off actually signing up for a class until the expiration date on the Groupon was upon me. Over a year later I realized that a basic craft beer class probably isn’t going to be very informative to me, so, loving Whiskey and all, I went with that one, and I was not disappointed. 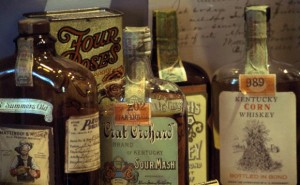 Sorry about the lack of my usually large amount of pictures, but all the learning left no time for pictures.

The class was held at Maeve (which means “She Who Intoxicates”) and for the life of me I could not remember the name of the expert coach they brought in so I searched the interwebs and found it was Chuck Cowdery. He worked in marketing for the distilled spirits industry for much of his life, but now mostly teaches and writes.

We tasted four different Whiskey’s: Jameson, Johnny Walker Red Label, Jack Daniels, and Templeton Rye while Chuck talked about all sorts of things Whiskey. He definitely knew a lot, and I learned a lot.

I learned that diluting the Whiskey with water actually allows you to taste the Whiskey better, because unlike a beer which rarely has an ABV above 10%, Whiskey is about 40% alcohol and that can really blunt your taste buds and tire them out quickly.  It definitely worked for me.  I tried the Jameson first without dilution and then with some, and tasting the Jameson after dilution really brought out the caramel characters for me. I’ll definitely order Whiskey and Water more often from bars, although the last time I ordered one from a bar, I ended up with a shot of Whiskey and a glass of water. I think I need to frequent better bars.

I never realized how Blended Whiskeys were blended. I kind of just assumed it was Whiskey’s of different ages that were blended, kind of a young Lambic is blended with an aged one to blunt some of the sourness. I was completely wrong. A blended Whiskey from across the pond like Jameson or Johnny Walker will have a certain percentage of single malt whiskey made from 100% malted barley. The rest will be from what I think I remember was called a grain whiskey, made from some cheaper grain. The more expensive Johnny Walker label colors will have a higher percentage of single malt.  On the other hand a blended Whiskey from the US (like Seagrams), is whiskey blended with Vodka.

This must have been the first time I have ever tasted straight Johnny Walker, because I wasn’t prepared for the smokiness. Kind of reminded me of the New Holland Chatrooka Rye Smoked Doppelbock in smokiness (if not in much else).

Speaking of Rye, those who are fans of the blog probably know I love the spicy pepperiness that Rye gives to beer, and the Templeton Rye was my favorite. The grain bill is about 95% Rye and the Whiskey was originally meant to be a flavoring Rye for cheaper blended Whiskey’s.

That’s just the tip of the Whiskey Iceburg that you get into in this class.

If you ever get a chance to take an I Wish Lesson you should go for it. I wholeheartedly recommend the Whiskey 101 class. Learn a bunch about Whiskey and drink some at the same time, how can you beat that? You might want to wait for a Groupon or a Living Social Deal as they can be over $50 for a 1 hour class, but once you get one you are hooked. I purchased a Mixology 101 class at the end of the Whiskey 101 class (at their in-class deal rate of course).